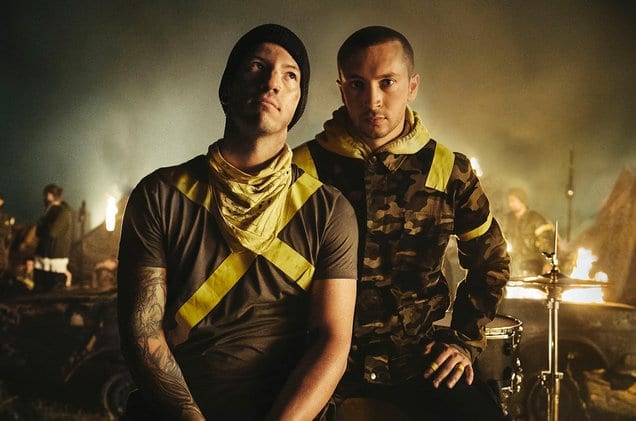 Twenty One Pilots: A Deep Dive Into Trench Theories

I honestly didn’t realize how much I missed Twenty One Pilots until I was watching a new video and yelling “those are my sons!!” at the screen. I was working on a piece for Billboard (you can read it now) and was having so much trouble keeping it from just being a really personal scream into the void, so I thought “hey! that’s what having my blog is for!”

And so here we are, ready to do a deep dive into these early stages of Trench. Won’t you join me?

Okay so if you haven’t been following along with the insane number of cryptic clues appearing on this website over the last 3 months, let me catch you up all at once.

The eye closed and everything went quiet for a looooong time

TØP won Most Dedicated Fanbase at the APMAs, Josh apologized for Tyler’s absence by saying “Tyler wishes he could be here but he’s severing ties with DEMA” …???

The TØP merch store updated and a GIF of Car Radio had a weird URL in it. If you typed it in online, it took you here. The capitalized letters on the page spell EAST IS UP (which you may now recognize from the lyrics of “Nico and the Niners”) and there’s a violation code at the bottom. If you add that violation code to the website address, it takes you here.

Some of the things that have appeared on the site over the last few months include journal entries from someone named Clancy (more on that later), maps of DEMA (more on that too), weird codes — like 018 07MOON 08 for example — that match up with birthdays and release dates, GIFs, and a dozen other strange things. Here are a couple important things to note:

Billboards started popping up all over the world.

I woke up this morning to find that the boys were back in town with TWO NEW SONGS.

What does it mean?

There’s been a lot of unexplained lingo shared on this secret website and unless you’re doing hours of extra credit homework, you won’t have explanations for any of it. This section is devoted to the definitions of everything, but we’ll get into what I think it means in the context of the album in the next section. I’ve compiled as much as I currently know below… honestly, after you know this, the lyrics make so much more sense.

This has been one of the main things mentioned so far. For now, let’s talk about the real world definition. Dema, or dakhma, is also referred to as a Tower of Silence. It’s a big circular building from one of the world’s oldest religions and it’s used for…. excarnation AKA you left dead bodies on top of them and then vultures or other carrion birds would come to eat them. *john mulaney voice* GROSS, MOP IT UP.

Maps of this building were shown on the hidden website, along with the nine circles from the Blurryface cover that each referenced one of the songs on the album. I’m assuming The Nine/The Niners has something to do with those nine circles.

Alright so Nico is named a few times, and now there’s a whole song about him. He seems to be the guy in charge of DEMA who’s keeping Clancy trapped. He sucks tbh and I think he’s the Trench-era equivalent to Blurryface, now that he’s no longer part of Tyler. He’s another separate person but in the same colours as Blurryface-era TØP (which cannot be a coincidence).

The Nine / The Niners

So these jabronis are like Nico’s henchmen? They are part of this group keeping Clancy and the Banditos trapped. From what we know, they can’t see yellow. This means that Clancy can use the colour yellow to escape them because they… can’t see it. Keep this in mind. Okay cool, moving on.

These are all the people up on the cliff in the “Jumpsuit” video, and also in a photo on the hidden site with the caption “not my only friend” and hONESTLY I CRY but anyway —

The Watchers are helping Clancy to escape and they throw all the yellow petals to mask him and help him escape from Nico. Two of the Watchers are Mr. Joshua Dun himself and Jenna Joseph, so excuse me while I cry just a little more.

This is mentioned on the site and also in the backwards message within “Nico and the Niners”. Uhhhhhh honestly I don’t know what it means yet and there is no real world definition, so I guess we might have to wait on this one. Stay tuned.

Okay, but what does it mean???

Right so now let’s get into my interpretation of everything. There’s so much going on and I think I’ve cracked most of it. I think. Honestly I could be wrong. We won’t know until we see more, but for now this is my story and I’m sticking to it.

So from my perspective… DEMA is depression, Clancy is Tyler, Nico is the voice in his head, The Watchers are his friends, the yellow is love & support, and the vultures are the critics/world audience.

So DEMA is a depression that Tyler feels trapped in. He doesn’t know anything other than that, so he’s comfortable there and feels like maybe things aren’t that different on the “outside”, so he stays complacent. But then he starts trying to escape it. Sometimes the voice in his head brings him down again and he has to try again.

But then he “escapes” it. He’s finally on the outside looking in and realizes that life really is better when you work through it. It felt like home because he’d been living with it for so long, but being out and breathing easier made him see how awful it was. And if he ends up back in it again, he won’t see it with the same hopelessness as before because he now knows what life can be like. He mentions others who are still “asleep”, people who are allowing themselves to live within the confines of their depression and turning it into a culture where we’re ~sad people~ together instead of trying to get better.

The Watchers are all of his friends who helped him to get better by supporting him, which I think is represented by his actual real and true friends in the video (I’ve literally been getting emotional about it all day, don’t look at me).

The yellow is love and support and positivity and whatever else. Nico and the Niners can’t see yellow, just like depression makes it so you can’t see the bright side because the voice in your head keeps drowning it out. So if Clancy is yellow, or if the Watchers can help hide him with yellow, he can escape. Tyler can work his way out of his depression if his friends help support him when he finds it hard to support himself. If he starts getting more and more yellow on his jumpsuit as time goes on… I’ll cry. If Tyler and Josh start wearing yellow paint the way they did with the black paint??? I’LL CRY.

The black paint in the Blurryface era represented their insecurities, so when Nico shows up in the “Jumpsuit” video and puts it on Tyler’s neck, it’s like saying “no no, don’t leave, remember this thing that you don’t like about yourself???” and then Tyler’s like “oh yeah…” and starts following Nico back… BUT THEN HIS FRIENDS THROW YELLOW PETALS AND HE RUNS SO FAST, HE RUNS AND I YELL GO MY SON, YOU CAN MAKE IT!!!!

And then the VULTURES. Ohhhhh the vultures. Twenty One Pilots became household names SO quickly after they started getting radio play. After making a song that literally said “this song will never be on the radio”, I can imagine how jarring that would be. I believe the vultures are the critics who pick them apart and act like it’s ~cool~ to hate them for some reason… or it’s just the eyes of the public in general, watching and dissecting their every move.

Breaking down some lyrics

Just a couple lil things I wanted to point out because I’ve literally spent my ENTIRE DAY thinking about this and desperately need to write it down so I can think clearly again.

In “Jumpsuit” when he sings “I’ll be right there, but you’ll have to grab my throat and lift me in the air”… it shows how he’ll probably fall back into his dark thoughts again because they’re still there, but this time he’s not going down without a fight.

In “Nico and the Niners” when he sings “I’m heavy, my jumpsuit is on steady, I’m lighter when I’m lower, I’m higher when I’m heavy“… if the jumpsuit represents support, does it mean he’s higher (better) when he’s supported? And when he’s alone and not “wearing” this love & support, he’s lighter and lower? Idk I’ve been trying to find a way to phrase this but it’s HARD. There’s so much going ON in these lyrics.

ALSO in “Nico and the Niners” there’s a BACKWARDS MESSAGE. I’m having PAUL IS DEAD Beatles flashbacks y’all!! So the backwards message says “we are banditos, we will leave DEMA and head true east, we renounce vialism”. So the Vialism Code of Conduct was mentioned on the hidden site, but I still don’t know what Vialism is. However… would true east be heading towards the sun? Like heading away from depression and into the light (which I assume is yellow enough that they won’t be seen anymore) of positivity and being Better?

Sit down and listen to “Nico and the Niners” with me for a minute, yeah?

(if you thought this post was helpful, would you mind taking a second to share it with the clique?)