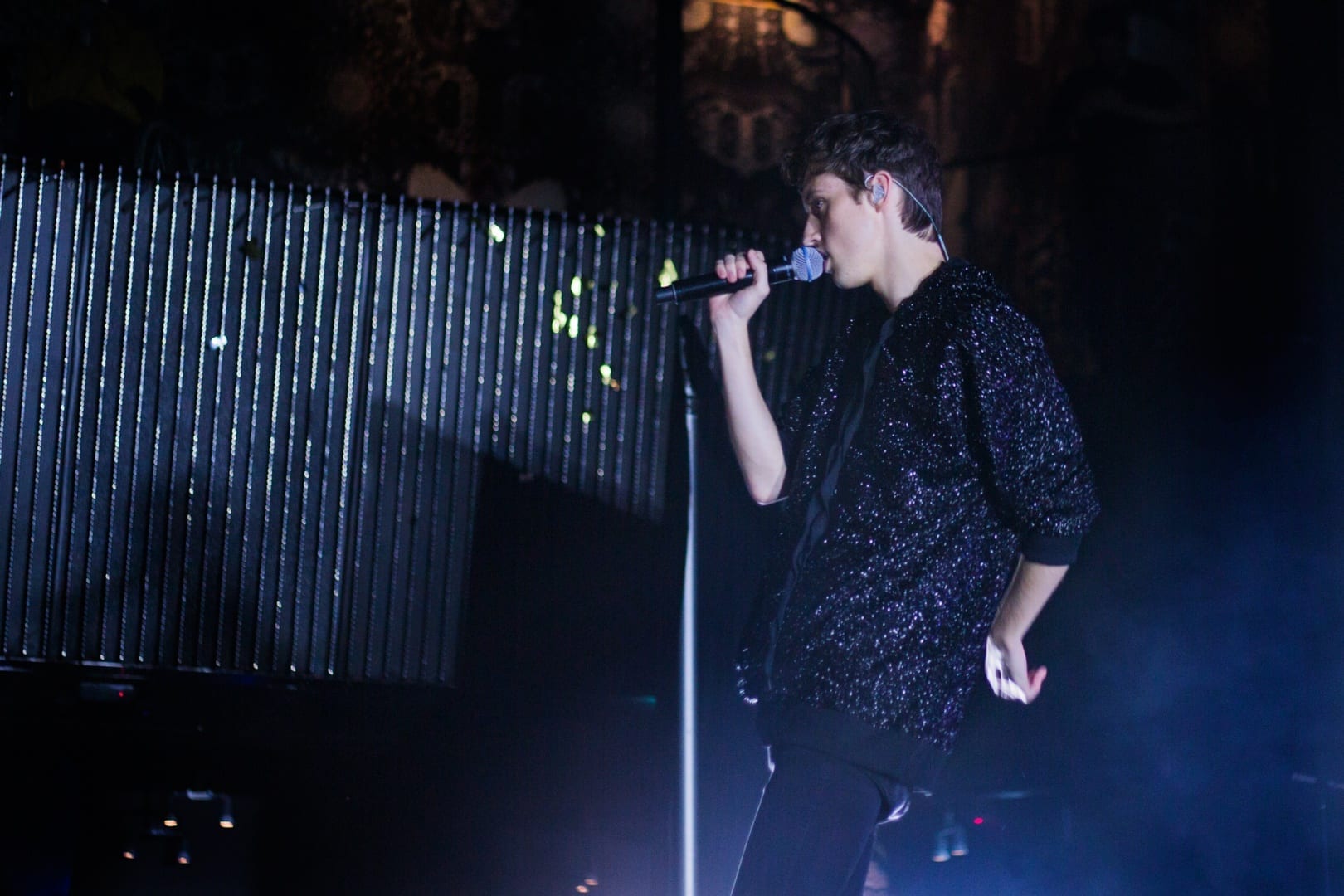 Troye Sivan, Australian pop sensation, played Toronto’s REBEL (formerly The Sound Academy) on November 8th. This night was quite eventful and the energy was high. British singer Dua Lipa opened for Sivan, playing her hits “Hotter Than Hell” and the recent jam “Blow Your Mind (Mwah)”. She sounds incredible and her voice is deep, raspy, and so powerful. Around 8:30, Troye took the stage opening with “Wild”. Fans screaming and singing along in excitement as Troye was finally onstage in front of them. He even said it was a long time coming, since his show in February was cancelled due to illness. Surprisingly, Troye has a large amount of family in Toronto with many in attendance, including his parents and brother Tyde Levi, a YouTuber and DJ.

The stage was set differently than on his Blue Neighbourhood tour. Gone are the neon lights shaped like houses, and out come a set of four screens showing stunning visuals related to the songs, including lyrics, words, backgrounds, and footage of Sivan. The set includes audio interludes with quotes and audio from Troye essentially summing up the songs into a few words. He added fun up-tempo elements to a few songs, and extended several to include more sing-a-longs, playing his first official single “Happy Little Pill” from TRXYE and adding a reggae element to “Fools”. He showed off his rapping skills by rapping TKay Maidza’s verse on DKLA.

At each show, Troye has been supporting an LGBTQ+ organization with donations or ticket proceeds. By attending this show, some ticket sale proceeds would be going to The Ally Coalition. Troye also spoke about the US election; even though we’re in Canada, our LGBT brothers and sisters are still affected. Troye was happy to be in Canada during this and attested to positive vibes and affirmations of being LGBT. Simultaneously, an engagement had also happened during the show and Troye stopped to acknowledge it and congratulate the couple.

Before playing “Ease”, a song featuring Broods, he asked the audience to be quiet to welcome a special guest. He assured us it wasn’t Alessia Cara, however fitting it would have been to have her. Instead he brought out his 3 year old cousin, Eve. He said “she doesn’t really like me that much” jokingly, and was hoping to score brownie points by bringing her onstage with her mum. Not so successful, but the audience loved her.

Joining him to sing the female duets, with tracks “Wild”, “Ease”, “Heaven”, and “Blue” was his guitarist – who I unfortunately forgot the name of. However, she was fantastic and the crowd loved her. Troye introduced his band, a three piece consisting of a drummer, and two female musicians playing keys, guitar, and backup vocals. The night ended with two encores, “Lost Boy” & of course “Youth”. Troye’s vocals sound great, nearly the same as the record with obvious live runs and changes. His deep timbre and soothing sounds make for a really fun show.

Troye danced along to each song, moving his hips and being the noodle he is with the crowd of young girls and gays going wild each time. The energy was fantastic with the crowd singing every song right back at him. They seemed really well behaved, though I may have been too distracted by Troye and being on the VIP mezzanine to really hear what was going on in the crowd. Overall, I think this was one of the best crowds I’ve seen, despite the attitude of young fans being “annoying”. They are so into Troye and love him for who he is. There’s a genuine connection. Many of them spent years watching his videos on YouTube to now seeing him live in concert – including myself.

While only encountering Troye for a small fraction of the night, seeing him live, hearing his voice, watching him have the time of his life, and later saying hi backstage meant the world to me. As someone who has looked up to him for years as a member of the LGBT community, having someone my age be successful being exactly who they are, singing about who they love unapologetically is something I never thought possible years before. Troye is truly a role model for so many. If you haven’t already and are still able to see a show, check him out because you won’t regret it.