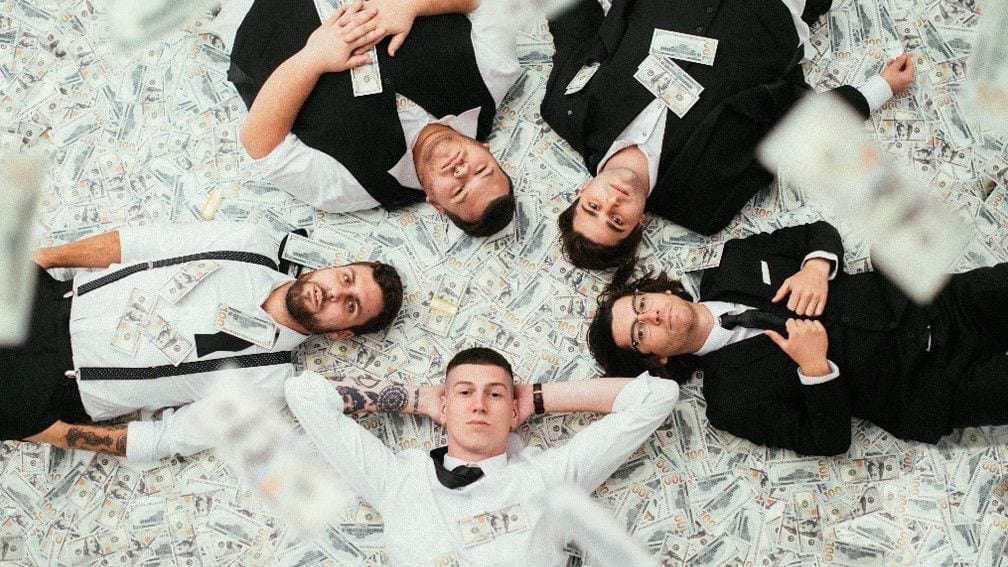 I’ve been a fan of Trophy Eyes since the moment I wandered past their set at Warped Tour last summer. I don’t know which specific moment hooked me, but I’ve listened to Chemical Miracle weekly since then. It’s so angry, but not in the usual “teen angst” vein you usually see in… exactly what genre are they? I’ve always had a problem deciding because they’re so adept at combining influences. Whether the song is more pop punk, more hardcore, or more Something Else Entirely, you always know it’s 100% Trophy Eyes. You can hear it. You can feel it.

They’ve been vocal about this genre bending as they roll out singles from their new album The American Dream, and I support it as someone who keeps yelling “genre is dead!!” whenever people ask what kind of music I listen to. Our generation was inspired by so many different sounds, it’s almost impossible to adhere to one single genre on a full album anymore.

A lot of people lashed out when the band released “Hurt” between albums which…. hurt. I always try to be open-minded when it comes to bands evolving & changing their sound. As much as I may enjoy a certain era, music won’t grow if bands make the same albums over and over. And I went into this song with an open mind and thought it was fantastic! Though to be fair, I do love a lot of pop/mainstream music. It combined the biting lyrics we’ve come to know and love with a more approachable sound for newcomers. It’s a perfect song to introduce them to a new audience that may not have given them a chance otherwise.

Fun fact: I didn’t give hardcore a chance until Pierce The Veil & Kellin Quinn released “King For A Day” in 2012.

I’m embarrassed for me too, it’s fine. I heard the chorus in a clip on Twitter and bought the song, with no other knowledge of either artist. When they started screaming, I was so shocked I turned off the car radio. But I knew I loved the chorus so I kept listening… and then I bought the whole album. Then I bought past albums. And then I started looking into other bands, and now I’m settled in to my emo phase at 26. Sometimes you need something more accessible to welcome you into a new band or sound. “Hurt” was THAT SONG. And y’all paid it dust.

The band shares constantly about their thoughts on genre, and how holding yourself to one specific sound can stifle creativity as you force yourself to stay within it. On The American Dream, we get a glimpse into what this open relationship with genre can create… and let me just say, I’m hoping this encourages other bands to do the same. If they’d made Chemical Miracle 2: Electric Boogaloo, I wouldn’t have complained. But this… this is something bigger and better. It shows growth and a willingness to push into new territory and I LOVE IT.

Have you ever had those dreams where you can fly?
‘Cause it hurts you too much, you know we’re all gonna die

Where to start? I’m overwhelmed.

Trophy Eyes makes me believe that the American Dream may still be real (even though we’re all Commonwealthers) but not in the same form as before? It’s not a nuclear family with a picket fence & a steady 9-to-5. It’s not necessarily about following your dreams either, doing whatever you want because we’re all gonna die. Maybe it’s about having the choice to do any of these things. Figuring out what will make you the most happy, and doing that. Whether it’ll make you happier to hit the road in a van or settling down into a more regimented lifestyle.

The most important moments on the album for me were “A Cotton Candy Sky” and “A Symphony Of Crickets”. Let me explain (it’s weird, strap in). I’ve spent my entire life unable to sleep. Like, it’s known that I operate on 1-3 hours of sleep because I have to. I had this alarm clock that would play nature sounds and it helped… until it broke. Ever since then, any sort of nature sounds instantly calm me down. Each of these songs utilizes different sounds: the former using rain noises and quiet rolls of thunder, the latter full of crickets chirping and — sorry, I just gave it another listen and started crying. I can’t tell if my favourite bands are making music that affects me more deeply or if I’m just becoming a fucking baby as I get older.

But each of those songs immediately grounds me. As soon as I hear those sounds, I’m brought back into the moment and I refocus on what’s in front of me instead of zoning out. I calm down and feel myself come back into my body. It keeps me engaged as the album goes on, and I think that’s such a cool thing (even if it may not be the general experience). I think my two favourites (not including the two aforementioned tracks) are currently “Lavender Bay” and “Something Bigger Than This”. I know that’s temporary, it always changes… but for what it’s worth, that’s where I’m at today. “Lavender Bay” wins whatever award will honour it for that KEY CHANGE, what a MOMENT. And “Something Bigger Than This”… Trophy Eyes is truly gifted when it comes to writing anthems, but without feeling like they did it on purpose. But I can hear thousands of people in a crowd screaming these songs back with everything they’ve got.

It hurts to even say those are my favourites. Each song is incredible for its own reasons. “Tip Toe” rips my heart out and throws it through a paper shredder faster than I can start blubbering when John sings “you used to say I love you when you said goodbye”. My full assessment of “More Like You” is “Phil Collins didn’t have to go this hard on the Tarzan soundtrack”. For some reason, “Broken” immediately reminds me of this classic.

So maybe it’s easier if I get someone else to summarize this album for me:

You’ll probably see more of my thoughts on Twitter after I calm down a bit.

Follow Trophy Eyes on Twitter/Instagram, maybe see them on tour.

What do you think of The American Dream?