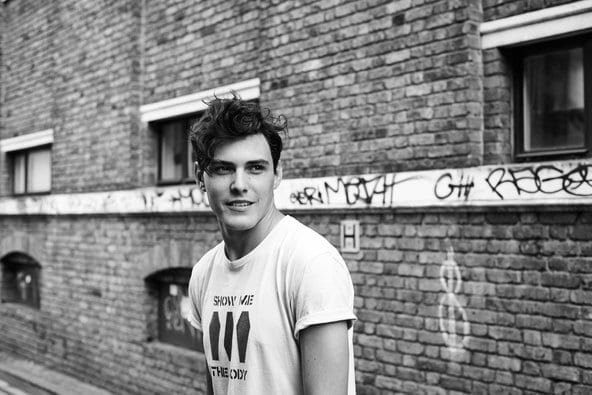 This is Tor Miller. He's from Brooklyn. He's very cool (as pictured).

Tor Miller: Another Blogmas Gift To You

Last week, I brought you 7 Minutes In Heaven. This week, I bring you something completely different. Say hello to Tor Miller.

If you’ve only heard one song of his, it’s most likely his new single Carter & Cash (it was Zane Lowe’s #WorldRecord on September 28, kind of a big deal). However, his entire EP is absolute gold. If I had to pick a similar artist, I couldn’t…the closest I can get is that his entire EP sounds like “These Four Words” by The Maine. That is a high compliment.

When I first heard people talking about him back in January (sliding that in there so you know I’ve been driving the bandwagon), I listened thinking it was going to be “indie pop” as advertised on his Wikipedia page. Um….that voice is far more than just indie pop. I put “Headlights” on my iPod, it came on while I was driving and I nearly swerved right off the road. I’m not sure if I can accurately describe it myself, so you’ll have to listen to the music above and see what I mean. So soulful.

Last week he was in Toronto for a promo tour and I told my friend to let him know that I love him. Y’know, like a joke. Like, half-joking. Like, probably not joking but not something I would say to his face, for fear of him taking it as an admission of being a stalker instead of “your music is the best how is it real”. I got a text a few hours later saying “Tor says he loves you”, so essentially I think we’re getting married but I’m trying to play it cool. Thanks Samantha (you can’t go wrong with SC)!

[Editor’s note (literally it’s just me writing, idk why I-): I’m 80% sure Tor is going to read this post and I’m going to wish I omitted this paragraph but in the pursuit of honest blogging…it stays]

Tor was signed to Glassnote Records (one of my favourite record labels) last year and has been quietly building ever since. “Carter & Cash” came out and it was game over. He’s pretty much set to be the next big thing in 2016. Very exciting things for my future husband.

[Editor’s note (Jan. 27/16, still just me): I regret this entire post, I am a terror and should not be allowed out of the basement of my parents’ home. Mom, are you reading this??]

You can follow Tor on Facebook, Twitter, and Instagram, and catch him at The Drake Underground in Toronto on January 26th! You will see me there, trying desperately to seem as normal as possible.

Update: Things took a turn, the wedding is on.