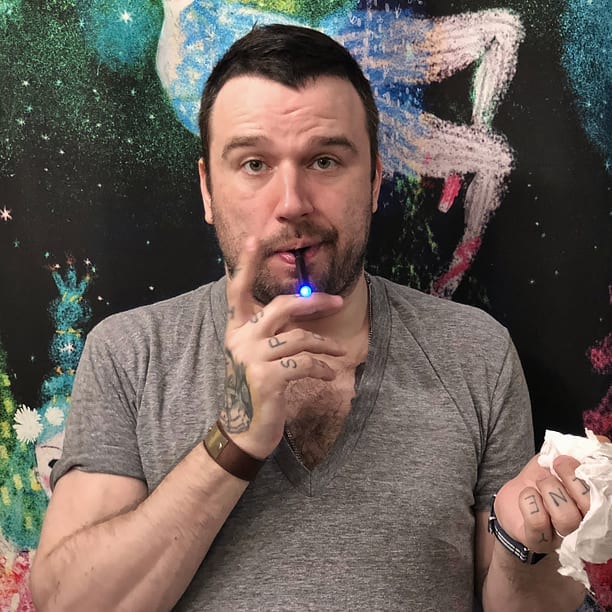 The Importance of Say Anything Saying Goodbye

The music industry is a breeding ground for negative experiences disguised as “normal” or “something you have to get used to”.

Getting paid in exposure instead of money to cover your rent?

You should just be thankful for the opportunity.

No women on festival lineups?

Well, maybe women should just ~be better~ at music.

Bands using their power position to take advantage of fans?

Not even gonna be snarky about this one, I’ll pass out.

While mental health is something we often discuss, there are parts of it that fly under the radar. We bond over songs that make us feel less alone in our sadness, and we praise people who are able to turn their demons into something beautiful for us to consume. But why do we still glorify the idea that you need to be suffering in order to create art?

It worries me when bands put out albums that are so dark… and then head straight out on tour. It has to be draining, performing your sadness for new people every single night after sleeping on a bus and talking to random press outlets about it all day. Is there a way to disconnect from your own music enough to prevent it dragging you back to your darkest moments when you sing about them? Have you given yourself any time to heal or are you holding onto your pain to create more? Maybe I just don’t ~get it~ because I’m not a touring musician, but I can imagine the stress is immense.

And that’s why I felt so relieved when I read Max Bemis’ statement this morning saying goodbye to Say Anything.

Please don’t read this and think I’m glad Say Anything is no longer existing in its previous form. I’m not. But I’m happy to know that Max is removing himself from a situation that affected his ability to function and thrive. Their new album, OLIVER APPROPRIATE, is on the way but won’t be toured. Because that’s what’s best for him, and I respect that so much.

So often we see artists touring themselves into the ground, until they literally can’t go on. Shows get postponed. Whole tours get cancelled. Artists are hospitalized. And while I obviously respect the hustle, I feel like there needs to be a balance that keeps everyone healthy. This isn’t “normal”. There’s just so much pressure. The label wants you to make them money and hit certain numbers so they’ll continue supporting your next record. The fans have more access than ever with social media, and they can be very demanding. And there’s the internal struggle of wanting to reach your goals or feel like you’re doing ~enough~. And with the invention (and lack of regulation) of streaming, touring & merch are the main ways for artists to make money these days.

It seems like everyone’s up for the challenge, until they’re not. Until the moment it gets to be too much. And I feel like eventually, everyone hits that point. It’s not a sustainable work schedule. And I so respect Max for being able to take a step back when he realized he needed to. The quote below is from his 10 page PDF (note: uhHHHH that’s very me, I would totally end this blog with a 10 page PDF for the record) and it gives me hope.

Say Anything has been a heartfelt, romantic joke. One that posed the question “How long does it take a neurotic to crack?” And it’s was funny to see just how much I could go through before I either went of the deep end, died, or just said “fuck it”. The answer is…. It took this long. And rather than the latter, I’ve decided to go with “fuck it”.

I can only pray that bands who grew up listening to Say Anything read this PDF, and take a look at their own lives. I’m not saying every band should stop touring and quit music. But I am saying that they shouldn’t continue touring if it’s putting them in danger, and we need to kill this idea that you have to be hurting to create something “real”.

I’m so excited to hear this album, it sounds dramatic and extra and like everything I could ever want from this final send off. And I 100% believe that Dine Alone Records are the best label to do it with (they’re such good people, what a combo!)

Protect the bands you love. Support them when they do what’s best for them. Treat people with kindness. ♥