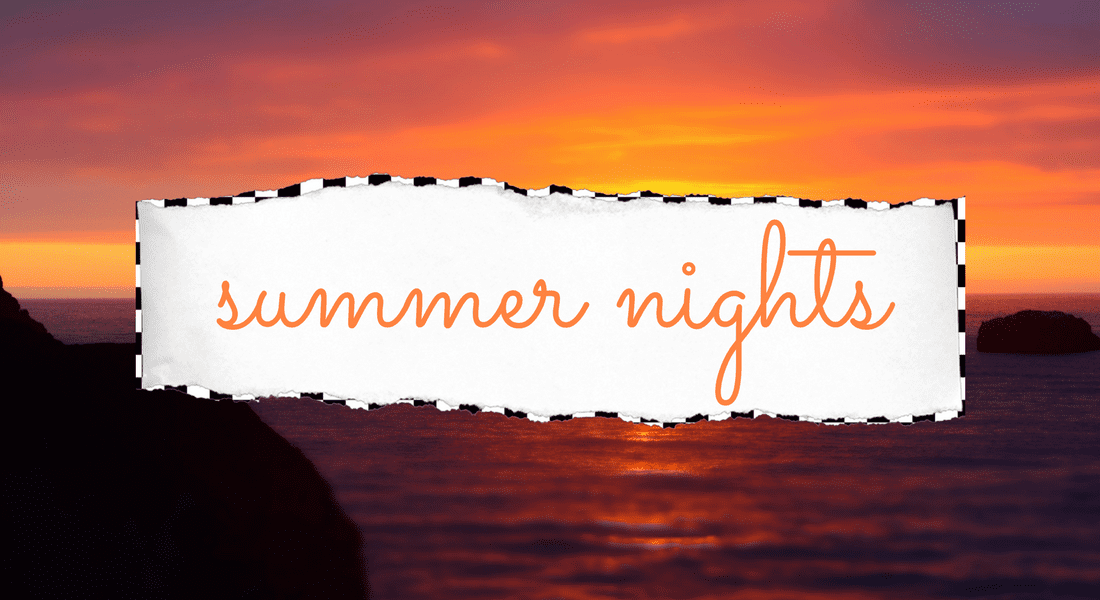 I’ve been feeling really overwhelmed lately and completely closed off from music discovery, and as someone whose entire life revolves around music…that is a Very Bad Thing™. I’ve made a point of going out and finding new music from new artists so that I can not only find new music for myself, but so that I can share with y’all as well.

So hey, welcome to a new segment here. I’m going to be sharing playlists every time I collect enough songs to do so. This one is Summer Nights (and you can find Summer Days over here). These songs are for the ride home from a house party when you’re tonight’s designated driver, but you’re having a great time sitting and listening to your music and the ridiculous conversations your friends are having. For sitting on the dock at the lake in the pitch black, looking up at the stars and wondering how the same sky can seem so boring at home and here make you feel so insignificant. For falling asleep in the sticky heat, reminiscing on the days when you begged for the winter to end.

Alec Benjamin – I Built A Friend

Alec has the most interesting songwriting style that weirdly reminds me of Flobots’ “Handlebars” from back in the day. It’s extremely detail oriented and really creates a world that you feel connected to. I watched the video for this track and grew attached to the robot by the end of the 3 minutes. I can watch entire films and never care about a single person I’ve seen on screen, but I cried at the end of this video (one single tear). I love his style and have been binge listening to his music ever since I found it. If you enjoyed this, I highly recommend giving “The Water Fountain” a listen. Another one of my faves from his YouTube channel was – I am not making this up – a cover of Eminem’s “Stan” with Matisyahu.

I can’t go anywhere quiet without Nate’s voice bouncing off the interior walls of my skull. Honestly, there’s no better way to spend your summer than listening to this song by a campfire. Alternatively, I can see myself having a couple drinks on the dock and embarrassing myself by dancing a little too enthusiastically… but this song just gets under your skin and makes you feel electric. I’m determined to get Toronto into the top cities on his Spotify because I desperately need to here this track live.

The intro to this song sounds extremely familiar, so please let me know if you can pinpoint why. This could be the party song of the summer. I can already picture everyone on YouTube using it as background music for a vlog, or people on Facebook using the lyrics as the title to their ~summer 17~ photo album. It’s a bit like Broods but more pop. More fun, less chance of crying at the club.

I love sharing new Canadian music with the world because, as a Canadian myself, I’m passionate about the beautiful music we make here that never gets the recognition it deserves. This track is a definite end of night track, or one for relaxing nights in. Some of the background sounds remind me of listening to Shiny Toy Guns or The Postal Service back when I started high school. It’s got that nostalgic vibe of fantastic bands from before them, but it doesn’t sound dated. It’s beautiful and atmospheric and it’ll charm you right from the first notes.

Boy Days – In My Ways

More bluesy vibes, because summer nights need some smooth tunes. Also 100% suitable for slow dancing at prom. Sometimes my brain connects songs that have no business being connected, but this song for some reason reminds me of “Naked” by the Spice Girls? I don’t expect anyone else to hear this song and feel the same way but it’s a compliment, I swear. This song makes me feel like I’m on a slow boat ride as the sun sets, when it’s just starting to get chilly but you’re not cold. But you can cuddle up into the person next to you and feel safe, and it feels like summer.

The moment you hear “make me feel dizzy” and then the instrumentals come back in… beautiful. Gives me chills every single time. This song starts out quiet and eerie, but keep listening. It’s a slow build, but it’s an adventure the entire way. I feel like I’m being taken through a breakup and it keeps getting sadder & more anguished. But it’s beautiful and it feels like when you have one too many drinks but don’t notice until you’re already halfway through the drink and you suddenly realize how loud you’re talking. And then you try to reel yourself in but it’s too late. That’s what this song sounds like. Very “Letters From The Sky” by Civil Twilight, if anyone else obsessively listened to that track after its involvement in Harper’s Island (is this reference too Canadian??)

Bat and Ball – Worth

This song was described to me as “feminist anxious-pop” and if people were divided up by genres, that would be my genre. It makes me feel like I’m reminiscing on who the band members used to be, but I don’t know who they are. So you can imagine the emotional dilemma I’m dealing with at the moment. The drum beats that come in during the second verse definitely convey that anxious feeling of a heartbeat starting to go out of its normal rhythm. However, the song itself doesn’t make me feel anxious (which I appreciate) while still allowing me to feel that “leaving the party alone at the end of the night” feeling.

There are so many cool things going on in this song, and none of them outshine the rest. It all blends together perfectly and creates a genuinely interesting song to listen to. The acoustic bass line combined with the main piano line feels like an indie claymation game (this one to be exact), and then how the twinkling piano notes brighten the song up… it all comes together to create an experience I can’t quite summarize. The chorus is more positive and pop leaning, but leads right back into the eerie vibes of the verse. This song is the one you’d listen to while laying out in the grass staring up at the night sky, listening to the sounds of crickets and watching for shooting stars. It starts to rain but only a little bit, so you don’t move. That’s this song.