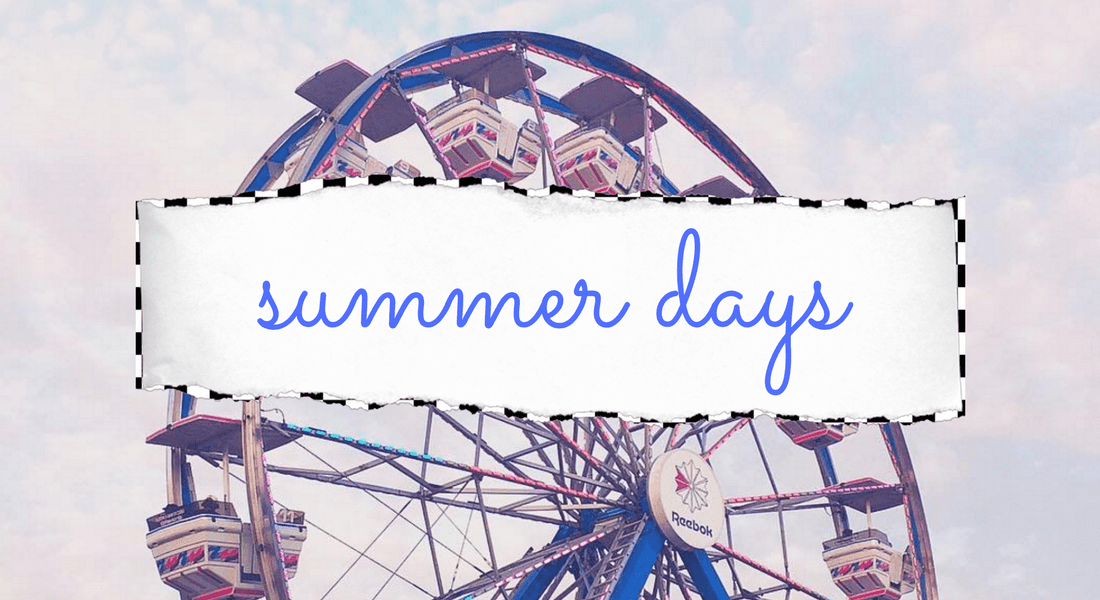 I’ve been feeling really overwhelmed lately and completely closed off from music discovery, and as someone whose entire life revolves around music…that is a Very Bad Thing™. I’ve made a point of going out and finding new music from new artists so that I can not only find new music for myself, but so that I can share with y’all as well.

So hey, welcome to a new segment here. I’m going to be sharing playlists every time I collect enough songs to do so. This one is Summer Days (and you can find Summer Nights over here). These songs are for riding in the car with the roof down, feeling the wind in your hair and the sun on your skin and remembering what it is to be alive. For sitting around between sets at a music festival while your sunburn worsens but your good mood never fades. For getting you through your day job while you know the weather outside is perfect.

This was the first song I came across – I can probably cite it as the inspiration to put this series together. It’s pure, wholesome summer music. I can’t stop myself from dancing every time it comes on, which would be a lot better if I was a good dancer. Everyone has been subjected to some very questionable moves lately, but this song erases my worries and I fully embrace my crossover dance moves between “girl in the crowd at the Jonas Brothers trying to get Joe’s attention” and “girl in the pit at Knocked Loose who is a little bit scared for her life but mostly trying to have a good time.”

Piano pop! My favourite thing!! This is the perfect “roll the credits” movie for a family friendly romcom. Like if this song came out in the 90s, it would be the perfect ending to The Parent Trap… or go back farther and use it for 101 Dalmatians. While news headlines get worse and my hope dimishes, this song is a shining star on the horizon reminding me to keep going. There’s nothing a good piano track can’t fix, to be very honest.

If you’re looking for your summer anthem, this might be it. It’s like original Kesha with more polish, right down to the Jack Daniels references. Listening to this song makes me feel powerful, and honestly I had to check the release date to make sure she didn’t summon in this new dystopian USA by asking for the American nightmare. This is someone I’m keeping a super close eye on, and I fully suggest you do the same.

Josiah and the Bonnevilles – Please

My only commentary for this track is “oh HELL YES” because I’ll be damned if that gritty sound doesn’t crawl right under my skin and shake me. It’s a folkier addition to this list because summer isn’t summer until your playlist starts to make moves towards folk/country. For a person who never watches movies, I sure categorize songs by where they’d be featured in a film. It’s the opening credits to a Judd Apatow film, by the way.

🍁 Ralph – Cold To The Touch

Canada has started to become a real powerhouse in the global music industry, which is so cool. And the resurgence of pop music as a respected art form that’s being innovated… god, what a time to be alive. Ralph is making the exact kind of music I need to hear when I’m getting ready to go out and have to convince myself not to bail on my plans. Mask the anxiety until it’s too late and I’m already out of the house, y’know? This song specifically has the power to do that.

Driving music is so crucial for summer. Modern Whale’s debut track is fantastic for exactly this because it’s fun and light, with no harsh noises to startle you while you’re focusing on the road. It feels like meeting someone new and still being nervous around them but not wanting them to leave at the same time. But at the same time, it feels nostalgic? I can’t quite explain it. You’ll have to listen for yourself and let me know what you think.

The perfect song for laying down in the sun and not moving for 3 hours, whether because you’re enjoying the vitamin D absorption or because you accidentally fell asleep. Put it on a loop and just feel it in your bones. I feel like this song would be perfect live, with the whole crowd swaying like the grunge teens at Smashing Pumpkins in that episode of The Simpsons. I love when you listen to a song and instead of hearing it, you feel it moving through your body. The COOLEST feeling.

Ending this playlist with some real unapologetic boyband pop from Holland. If the beat in the chorus doesn’t make you involuntarily shake your hips, I will mail you my left thumb. Ever since this void opened up in my soul where One Direction, The Wanted & the JoBros used to supply me with new music… I’ve been needing some real pop goodness. This is totally bringing my mojo back. http://www.paigebackstage.com/wp-content/uploads/2017/06/summer-days.png
Type to search or hit ESC to close
See all results