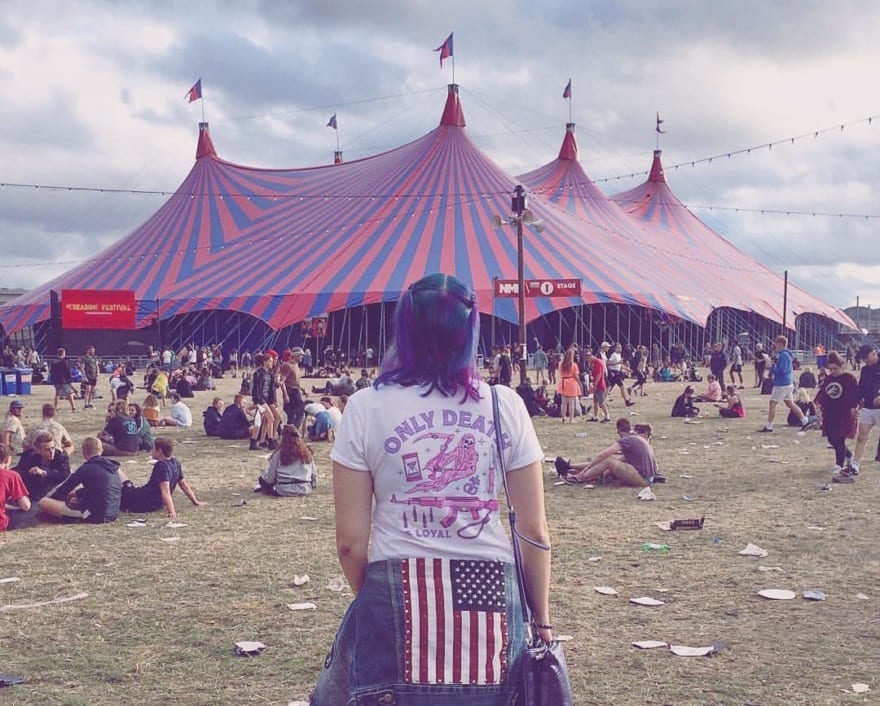 I wonder why everyone thought we were American? Shirt: Drop Dead. Jacket: thrifted. Hair: BLEACH.

Don’t ask me why I’ve flown halfway around the world 3 times for Reading Festival. I can’t explain it to you. That festival is so much more than anything we could ever imagine in Canada. I mean, our festivals are getting better… but they’re no Reading Festival. I feel like my minimal Instagram photos and occasional tweets didn’t quite get the message across, so let me reeeeally break it down for you.

I squeezed a few days in London into my trip before heading off to the festival – partly because I love London, and partly because I had to prepare myself. I’ve learned that the best way to make friends at Reading is to wear something from Drop Dead. I’ve never had an experience like this with a clothing line before, but in past years people have run through muddy fields just to tell me they own the same sweater and to high five me. So uh, that was my first stop immediately after my flight touched down. I’m obsessed with their Sonic The Hedgehog line, so I had to grab something with my fave rodent’s face on it.

Next was Skinnydip, because I’m super weak (I went twice) and because I’ve been lusting after their purses from across the ocean since the last time I was there. I got this purse in blue for $20 and this purse from their cowboy/rodeo themed line, along with this phone case because I couldn’t resist googly eyes.

I also made sure – after putting it off the last two trips – to visit the most important, famous location in the entirety of the United Kingdom. You know what I mean.

Because we’re good Canadians, we spent our first night seeing the Arkells in the sweaty upstairs of a pub. I figured they would be soooo entertained by the fact that we were GTA residents like themselves, but we realized immediately after arriving that literally every person in the venue was a Canadian visiting London. The soundtrack to the night was half “Oh! The Boss Is Coming” and half “omg you’re Canadian too??? me too!!! omg!!! where are you from???”

As is tradition for me at this point, I scheduled my entire trip around my appointment at BLEACH. I left feeling like a mermaid, but nervous about how the colour would destroy itself as soon as I washed it.

Problem solved: I visited The Braid Bar and got my hair plaited so tight that it stayed perfect until I got home from my trip…and also gave me a temporary face lift as it pulled my entire face back into the braids. Worth it.

We stayed at an Airbnb about 60 seconds from Paddington Station, making it the most convenient location I have ever “lived” in my life. Close to transportation, a McDonald’s, souvenir stores, cute colourful houses for impromptu photoshoots… everything you could possibly need. However, the Airbnb itself felt like a Barbie house – it looked great but it felt like it wasn’t meant for a real human to live in. The bed felt like a cardboard stand-in, pieces of the walls fell off when you walked by them, and there were doors that didn’t open or lead to anywhere. Worst of all, no TV means no British TV and no Netflix.

When we rolled up to our Reading Airbnb, it was like a dream. Speedy WiFi, Netflix, fans (there’s no A/C there and it was a heat wave of course), and a real bed for human use. The couple living there was super nice and tons of people were staying in other rooms for the festival from all over Europe! If you’ve never used Airbnb, I totally recommend it. You live like a local and it feels more like home while you’re traveling. This code will get you $40 in credits to go travel (or have a nice little staycation).

Then it was off to the festival. Day 1 started with SWMRS, making it the 4th time I’ve seen them in 4 months. We missed Twenty One Pilots (which is good because things got HECTIC) but I fell in love with both Citizen and Trash Boat. I’ve spent years being wary of Die Antwoord but their Reading set converted me to an official fan. Day 2 brought a secret set from You Me At Six (I am still screaming) and uh…that’s it. I saw Zoe London walk by but didn’t say hello before I lost her in the crowd. Still kicking myself. Day 3 was by far the wildest with Modern Baseball, Fall Out Boy, and The 1975 all reducing me to tears – the FOB tears were because someone ashed a cigarette in my eye – and a lot of Kinder chocolate filling my stomach. A flight attendant on the way home literally made a joke to my face about how I was consuming too much sugar like a child so I almost threw a temper tantrum to really emphasize her point.

In closing… honestly, I feel like a lot of the magic I felt in London on my first visits has worn off and it feels like a normal city now. I could still see myself living there but it’s different now. I don’t feel the pull to drop my entire life and go. That’s probably good and says a lot about the progress I’ve made to live a life that makes me happier. I’m glad to be home and feeling inspired to blog and create good things in my local music scene. Can’t wait to see where this burst of energy gets me.

I’ve already got a billion blog posts ready to go so I promise to not go dark for another 4 months.