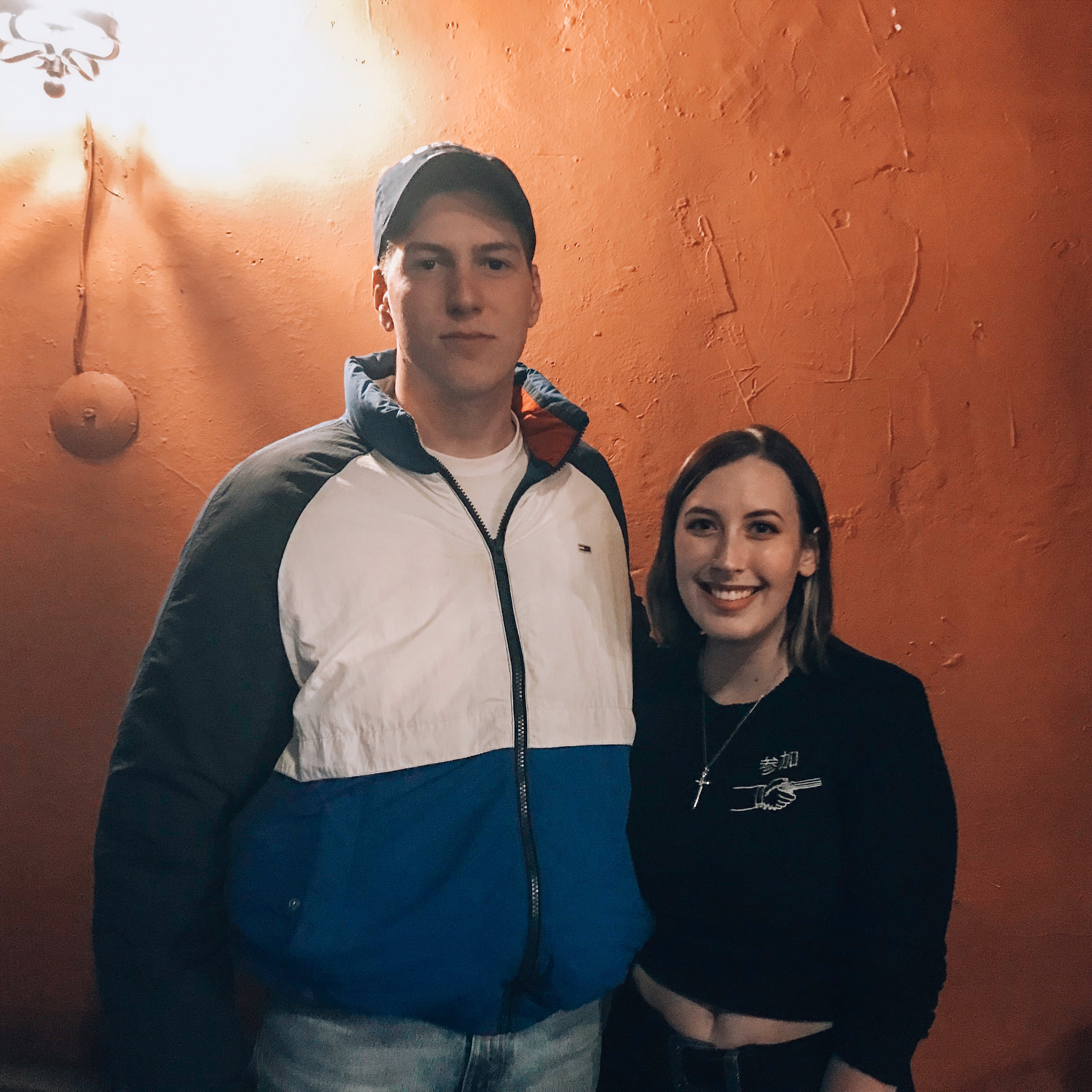 Imagine being Kristen and trying to frame the shot with both of us in it. We had to find chairs.

An Interview with John Floreani of Trophy Eyes

I had the opportunity to sit down with John Floreani of Trophy Eyes last week to discuss sharing your feelings through music, band tattoos, and the etiquette of taking photos with band members. I filmed a wholesome, wonderful video for my YouTube channel… and then absolutely butchered the audio because I am a content creator and not a filmmaker by any means.

So here, in a beautiful quiet format, is the transcription of said interview. Thank you again to John for chatting with me. Next time you’re in town, let’s get a pic of us hardstyling and flipping off the camera.

So first off, congratulations on your album The American Dream. SUCH a good album, literally couldn’t have asked for anything more from you guys. I really like how you just abolished genre and went with your own thing. How was that different from recording your last album?

This time… y’know, I think Chemical Miracle we wrote the same way, really. We went in with no real intention to write anything but our favourite record. And I think that’s kind of what set it apart from our earlier works, just going in and writing whatever we felt like and writing what we wanted to hear.

It’s amazing too because you don’t listen and think like “oh, this sounds like…”, there’s so much going on. Do you have any other new sounds that you want to experiment with going forward?

Yeah, definitely! I’m always writing, so as soon as we got out of the studio I was writing more… different riffs and playing with other things. Y’know, we always try to find something new and fun to add to the collection.

For sure. I know I’ve heard a lot about the album inspiration, all the different bands you were listening to, you guys were in Texas which is kind of a different vibe.  Do you have any other new bands that you listen to that get you excited to keep writing?

*thinking* That’s a good question. Not a lot of new music, really. I really only listen to like classic music now. Especially on tour, I don’t actually listen to music; I just listen to white noise. It’s kind of like, the next best thing to silence. You kind of get overloaded with everyone playing all the time and there’s never really a quiet moment. So yeah, when I do get a second, I listen to just like… noise.

Yeah, but I did just recently find — they’re not new, but I just found them. Black Marble? Yeah, I really like them. That’s kind of what I’ve been listening to.

It’s interesting about the white noise because I felt like a couple of the songs on The American Dream like “A Cotton Candy Sky” and “A Symphony of Crickets”, it’s like… you get a lot of ambient noises in there, settling you back into the album. It reminds me of ASMR on YouTube, different sounds just make you feel so relaxed. It brings you back to focus in the middle of it.

I think that’s what the intention was because the record’s kind of up and down and everywhere and very exciting, like… high energy and fast. No, we definitely needed a place to kind of settle everything in so you can refresh.

I feel like with your albums, they’re very personal. A lot of the lyrics are very… kind of just baring your soul to everybody. And I feel like that could be either really scary to share that or really cathartic putting it out there. But also, people around the world are all connecting with it and screaming it back to you. What’s it like going literally halfway around the world and still having people connect with your music in that way?

It’s pretty crazy. It’s hard like… a lot of people tell me like “oh, you should feel so lucky,” and I do, I’m very thankful for how emotionally connected people are to our music. But at the same time, I didn’t write it for that. When we first started writing music, I knew that if we were going write emotional music and something that I was going to scream about, then it had to be real and something that I really cared about, so I suppose that’s where that raw content comes from —

But um… yeah, it’s great! It’s a great thing, but a lot of the things that I sing about is also not something that I want to talk about with a stranger, so that’s um… people come up and they’re like “oh, I heard this” and it’s kind of like “shit, I’m not really ready to speak to you about that, I don’t know who you are.” And I don’t know what lets me sing it in a song and immortalize it, it’s really something you can’t take back.

Well that’s the weird thing too. You’ve shared it through music, but it doesn’t necessarily mean that you want to have a 1-on-1 conversation with every person about your life story, but it kind of opens people up to feel like they can ask that of you. I feel like that can be a really awkward thing to balance.

Yeah, it’s strange. It gets awkward sometimes, but I think at the same time it’s not — I think therapeutic is the wrong word, but I think it’s more of just like… expression. Learning how to express yourself, and that’s who I am. I like to be honest and real, and I don’t really like small talk, so that comes out in my writing. It doesn’t mean I’m ready to talk about it at any given time to random people, but it’s easy for me to write about.

We actually have a question from the audience. They wanted to know… just because you’re performing these songs every night, I feel like you can gage the audience reaction based on certain songs. If somebody’s new to your band, what songs should they start with to get into it?

I think if I was going to introduce someone to our band, I would make them listen to “Something Bigger Than This” and “I Can Feel It Calling.” They’re my two favourite songs and I think they’re the best description of the polar opposites and the in between of what Trophy Eyes plays. I feel like the last song on the record The American Dream is a great example of the slow melodic and fast sporadic chaos, and that kind of epic thing we always try to do? Flesh everything out and make it just explode so you’re kind of going “what the fuck is that?”

Yeah, it always feels really big, like I want to see it in a stadium. One day, we’ll get there. Call back to this interview when it happens. So speaking of your fans, I always see people with really cool Trophy Eyes tattoos online, which must be cool to see people putting that on their bodies forever. Do you have any tattoos related to music or are there any bands that you feel like you could do that for?

Yeah, I have a Worthwhile tattoo, they’re a hardcore band from Southern Cali. They had a huge influence on me, their record Carry On Kid definitely inspired me to write the way I do. I have a Johnny Cash tattoo on the inside of my arm because he’s like my idol. I have a Gallows tattoo…

Yeah, I lock into music like that, it changed my life and inspires me as well, so yeah I have a few.

Yeah, one day I will too. Not yet because I know I’ll go overboard as soon as I start. BUT our FINAL question is the most important question I could think to ask. According to Twitter beef, hardstyling is over. We’re no longer doing hardstyling pics with bands. So I was reading through comments and one guy had a really good suggestion that we reverse the hardstyle and start doing business handshakes. What are your thoughts on the new type of picture you’d like to start taking? Or just go back to the normal awkward smile.

Well, I don’t know. I think it’s kind of strange the way that that works now, like when I was a kid I was too afraid to speak to anybody who played music. There’s no way I’d go and ask them to do something for me, like that’s beyond me. I think now with the involvement of the internet, people feel like they know these people, they can go and ask anything of them. A lot of the time, we’re just kind of very normal, chill, sensible people. And people come up and they’re like “let’s high five and stick your tongue out and flip the camera off!” and we’re like “who the fuck are you?!” like I was doing something! It’s like, it’s lovely, and I love taking photos and meeting people. I mean, I can only speak for me. But I much prefer just to stand and smile and wave.

If I got a photo with somebody I loved, I would like it to be something presentable. Something that I can take seriously. If I met Johnny Cash — if I could somehow walk up to that man and say “excuse me, could I have a photo with you?”

“Can you hardstyle with me, Johnny Cash?”

“Would you hardstyle, bro?” Like could you imagine how stupid that sounds?

I would really like that photo, but I feel like 20 years down the line, I wouldn’t anymore.

No, I’d be broken hearted. But I don’t know, I suppose I just like to kind of stand there, and like who I am and just smile at the camera.

Check out Trophy Eyes’ The American Dream below