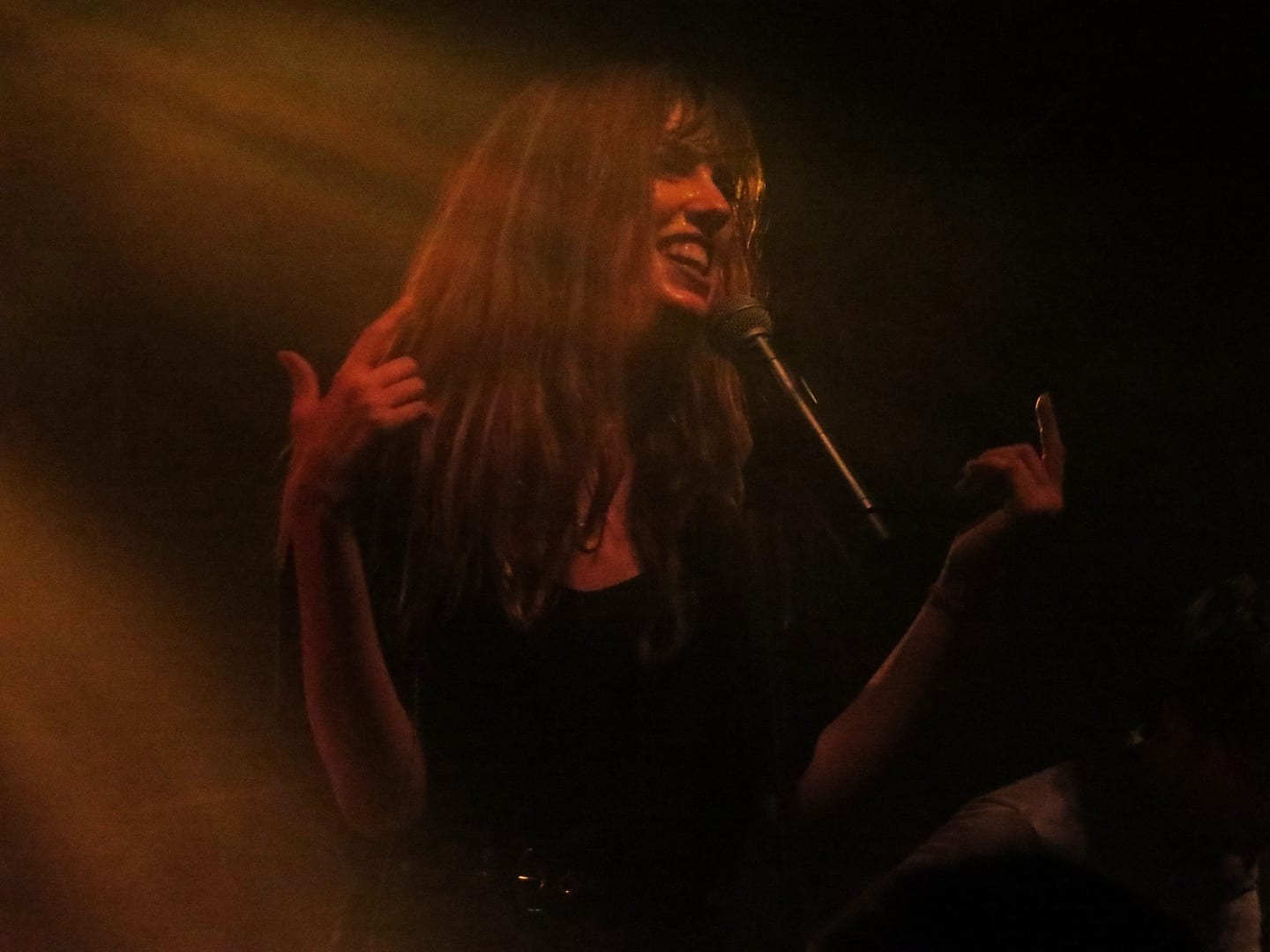 Fierce Females I Fuck With (And Jam To)

Listen, there is nothing better on this planet than finding an artist whose music unlocks something in the pit of your stomach and causes you to evolve. Literally evolve. Like you started out as a Squirtle (tough but smol) and now you’re a goddamn Blastoise and you’re ready to take on the patriarchy because you got the motivation you needed and no one was there to press B and hold you back.

There is nothing better than the fact that we are in an age where music is being dominated by strong women who won’t take shit from anyone. Women who fight against feminine ideals in our western culture, women who sing songs about things other than being sad about boys…

…women who dress how they want and don’t smile because some creepy dude at the subway station told them they were prettier when they smiled and dye their hair pink and write breakup albums about a dude and then make him play bass on the entire thing during their entire tour. Gwen Stefani, you’re still the real MVP.

In the last couple years, I’ve found a lot of these women and I feel like it’s changed who I am as a person. I found myself listening to music more objectively and discerning between lyrics that were fun or playful, and lyrics that were damaging or misogynistic. Our generation has the benefit of being potentially the last one raised being taught how a “lady” should behave. We now have – through the power of the internet – a whole new knowledge base to tell us we can be whatever the hell we want. People feel threatened by this, and I just absorb power from that. Knowing my self-enlightenment and education is frightening to people is the thing that gets me out of bed in the morning.

In the wise words of that dude in the Unbreakable Kimmy Schmidt intro…females are strong as hell.

Let’s check out some strong as hell women who I totally fuck with.

Note: If you see classics like Alanis Morissette, Lady Gaga, and Blondie left off of this list, it’s because I’m focusing on the new ladies kicking the door down. I’m completely obsessed with them as well, but you already know all the reason why they’re the queens. Okay, now let’s go.

THIS GIRL IS AMAZING. Breaking into the industry singing a song about being anti-social and not wanting to go out…literally, this is my dream. The first time I heard “Here”, I felt at peace because there was a catchy mainstream song advocating for those of us who seriously do not want to go out and socialize for fun. I prefer smaller groups (or Homesick). Plus, homegirl just sold out two nights back to back at the Danforth Music Hall so you could definitely say she’s killing it right now. NICE.

Have you heard Ex’s and Oh’s? Yeah, enough said. This interview with Billboard confirms it all.

From a young age, Elle King knew she wanted to be a “badass bitch.”

I’ll admit I’m new to the Grimes train. I’d heard her name in passing but never heard anything until Art Angels. Even then, I was a couple weeks late to that. I was talking to my friend Nick (who makes his own sick songs as well) and he recommended her. He’s been giving me A+ music recommendations since I met him in the 9th grade so I trusted him. I 100% still trust him.

She makes her music completely solo out of her bedroom using Pro Tools. There is nothing cooler than someone who needs literally not a single other person in order to do what they want to do. I could write an entire grad school dissertation on how unapologetically “pop” Art Angels is while still being something completely fresh and different. UGH. SHE’S AMAZING.

“I am genuinely surprised Paige put Halsey on this list,” said absolutely nobody in the solar system.

Halsey built her following out of young women on the internet. Now, from my experiences in the industry, I know that often teenage girls are seen as crazy and irrational. Often, bands are looked down upon if their fanbase is all young women. However, Halsey made it work and turned herself from an unknown releasing songs on Soundcloud to one of the biggest names of 2015/2016 in under 2 years. When people focused too much on her hair, she shaved it off. She’s widely considered to be everyone’s “problematic fave”, which means everyone cares enough to have an extreme positive/negative opinion of her. If this is what she accomplished with just the attention of her avid supporters, imagine what she’ll do now that the world is watching?

If you’re on Tumblr, you probably saw Hayley’s music video for “Girls Like Girls“. I hadn’t realized she was also an actress (CSI: Cyber, The Fosters, Lemonade Mouth, Insidious: Chapter 3) but was just basing this on her music. She also ice skates, dances, and does karate. So what we’re saying here is that Hayley’s a multi-talented powerhouse. She co-directed her own music video for the above mentioned track and fully directed her next video for “Cliff’s Edge“. Using her music to “give girls some representation in a positive way” and tell the story of a girl stealing a dude’s girlfriend (instead of a guy stealing another guy’s girlfriend). I love it all.

Lorde has always been killing it. When Lorde was 16, she was recording wildly successful music and telling stories about real teenagers instead of the idealistic false reality we usually see. When I was 16, I’d just gotten my braces off and let people hang out at my house just so they’d have to invite me.

Marina is my queen. She has the voice of a siren, luring me deep into the ocean where I hope to die because I will never achieve her levels of greatness. She’s honest and open about everything, and she put out “How To Be A Heartbreaker” (the video received backlash for treating men the way women are usually treated in videos…ok……), and….well, honestly I’ve never heard anyone call her a problematic fave. It seems like she’s doing things and making points that no one can argue with because she’s just that good.

(If I’m wrong on this and she’s actually super problematic, let me know…but like…?)

I got a press release at work letting me know that Marina’s EP was coming out. I’d never heard of her, as the French version of “America’s Got Talent” didn’t air in Canada…I was missing out. This girl is only 17 NOW. NOW. She put out her EP 2 years ago!! And “Homeless” is the most fire track I’ve ever heard from a teenager. The themes are so grown and her voice is so strong. I can’t wait to see what she does next.

Melanie is a new love of mine. Like…as in, “I started listening to her this week” new. But I’ve memorized her entire album word for word and am in so deep already. First, you have to appreciate how well she did on The Voice. She held her own against adults that trained for years. Then, she puts out this album where the title track rips me to shreds. “Cry Baby” is a song about me, to be honest, but is also the song about anyone who feels emotional and cries when they don’t mean to. It just kind of happens and all of a sudden any point you’re making is completely invalid. Melanie opens the album with this song that says “They call me crybaby crybaby, but I don’t fucking care” and I’m like YO MEL ME NEITHER!! And all of a sudden I’m screaming in the car and I literally do not care if I cry. Men get upset that they’re not allowed to have “feminine emotions” like sadness and fear? And they aren’t allowed to cry? Listen, I’m not allowed to cry either or else I also get saddled with the label of “woman”. Apparently that’s synonymous with “too emotional” and “irrational”, so like…we’re all suffering. Let’s all just cry. Let your tears fall to the ground, we’ll just let them drown.

(But actually…Mad Hatter & Soap are the best songs on “Cry Baby”, 100% recommend the whole album)

Ryn is like a vision that comes to you in a dream and tells you not to worry because she’s going to dismantle the patriarchy on her own so you can get some sleep. She writes these songs that are about being in love and being foolish (in fact, The Fool) but not apologizing for feeling these emotions and having these experiences. Not pining and asking someone to take her back. Just acknowledging that it happened and being really honest about everything she’s done and will do.

As a real life human, she’s equally incredible. One time, she kissed my whole face and I haven’t washed it since (just kidding). She’s not afraid to get into a Twitter battle if someone is rude to her and she will tell you off if you say something she doesn’t agree with. She’s not going to sugar coat her words just to avoid any controversy. She’s Ryn Weaver and she’s going to make sure you know that. BAD. ASS. Samantha & I used to always say “Ryn knows” every time we heard a song or an interview, because she can take exactly what you’re thinking or feeling and put it into words that help you to understand yourself. I could talk about her all day, tbh.

The first time I saw W Darling perform live, my jaw literally dropped and stayed dropped for her entire set. Her vocals are indescribable. It’s almost…ethereal? That might be the closest I can get. Her words break your soul apart into tiny little pieces and then she helps you put it all back together. If you haven’t heard her music yet, I highly suggest “Night Like This” or “Hunting Happiness”. Ugh, no, I recommend literally every song she’s got up on Spotify. I love when an artist can write lyrics that are so honest that they haunt you. W Darling haunts me all the time.

Who is your favourite fierce female?

Let me know below and let’s talk about amazing women in music!