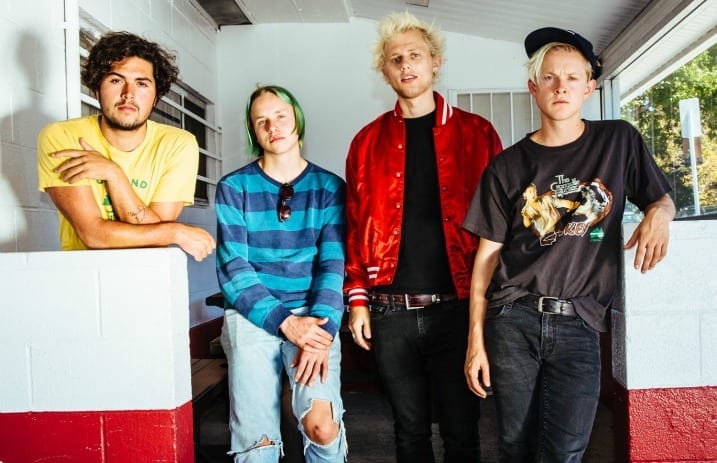 At The Barricade With SWMRS

I fell in love with SWMRS the way you fall asleep: slowly, and then all at once.

No wait. That’s not right. I had the honour of speaking with Cole last week about tattoos, Canada, how to describe their genre, and Drake. And shockingly, I wasn’t the one who started the 6God conversation. Go figure.

SWMRS is the band we need but not the one we deserve. I’ve been working in various parts of the industry for a handful of years now, and talking to Cole on the phone was the first time I ever felt like I was treated like an equal by a peer in an industry situation. Countless times, I’ve been ridiculed for enjoying a band (being a “fan” is bad news, apparently) so it was a welcome switch to have that be A-OK. Read on to find out more about your favourite new punks.

“Drive North” came out a week ago today, I’ve been listening to it on repeat since the Rolling Stone stream went up. However, every time I try to recommend it to people, I have a really hard time explaining your genre. I feel the closest I’ve gotten is “surf punk” but I’m not really sure. How would you describe your sound?

I just kind of call it modernist, like modernist punk. Basically, it’s very much a product of us having such unrestricted access to all of the different music ever made. And so there’s bits of electronic in there, there’s bits of R&B. We’re first and foremost a punk band, but because we have such unrestricted access to all this music, we know enough about every genre to incorporate it all into our songwriting. So I would say it’s modernist.

That’s a good point. I feel like “genre” has kind of gone away too. You hear things on mainstream radio where it’s like “that shouldn’t be here”, so I feel like it’s a good time for you to come out with this album. And you also got to work with Zac Carper of FIDLAR. How was that different from other producers you’ve worked with in the past?

Zac was a lot more hands on. He’s kind of idiosyncratic and so he would always be tweaking up songs and you can totally hear that in a lot of the songs like… “Hannah” was basically just him and me tweaking around in Pro Tools. There’s a lot of heavy production on this album and it was all stuff that…it was our idea to make it super trippy like that but he was the person who actually made that happen for us. And he’s also just a good dude, a really good person to have around you. A really, really cool person. Really nice.

Thank you so much! I’m just glad that you listened to it all the way through and can kind of feel the different…all the connectivity.

Yeah! You listen to albums sometimes and every song sounds exactly the same and it’s like “okay, I’ve listened to this song 12 times”…but on Drive North, the songs fit together but don’t sound identical. It’s nice. But you also have four guys and have to get everyone’s opinions in on the music. How do you guys handle the songwriting process? Do specific people write specific things or…how do you kind of start that?

So, on all the songs that I sing, I write the lyrics and the initial music. There would be songs on an acoustic guitar without anybody else but they wouldn’t be nearly as good. Max & I both do that; he does that for the songs he sings. And with Joey & Seb, it’s a huge collaborative process to give the songs feeling and more meaning because they’re the backbone.

My brain exploded, I couldn’t believe I never made that connection. Was that intentional? Was it supposed to be the other side of Miley?

No! It ended up just being super serendipitous. I didn’t write either song like…for the album. It was more like I was in my room kind of playing around and they were really, really small sounding…more electronic kind of stuff? I’ll put up the demos eventually. But “Hannah” was just this song about a girl I used to see and hang out with a lot. That was kind of a song I wrote to impress her, but also she was just super fascinating to me. It’s all about her struggles with mild mental illness. I tried to make the lyrics as simple but as evocative as possible.

I think you definitely pulled that off. Speaking of Miley…in “Miley”, you asked “Miley, what’s your next move gonna be?” and apparently that’s getting re-engaged to her fiancé and then kind of calming down. Does this change her image as a punk rock queen or does it make her more punk rock for doing exactly what we didn’t foresee her doing?

Yeah, exactly, she just does what she wants. It’s not even that she’s unpredictable, it’s that she…she is her. She doesn’t belong to anybody else besides her. That’s what punk rock is all about. It’s agency. It’s about owning yourself.

Yeah, no kidding. And it’s great that coming off your first album under this new name, you’ve already found someone who will tattoo your album title on them forever.

Do you have any fans that have SWMRS tattoos?

Yeah, it’s been happening a bunch lately! We keep seeing it on Instagram! It’s awesome.

It’s a good tattoo though! It’s hidden so everybody can get it and hide it away.

Yeah, the whole thing is like…lip tattoos go away eventually.

So then they can tattoo the next album title.

You guys have done a lot of cool things, like I saw y’all at Reading Festival as Emily’s Army in 2014, and then you played Warped Tour a couple t-

Yeah! I can’t even believe it, it’s such a weird small world.

Yeah, so there’s that, you’ve played Warped Tour a couple times, you toured with Rise Against, and now you’re playing with The Frights and doing all this amazing stuff. What is the coolest thing that you feel like you’ve done so far?

I think…it’s all really cool. Meeting Mike Tyson was pretty rad though.

And that wasn’t even because of the music, we just met him at an airport but that’s probably the coolest thing we did all together. [laughs]

I bet you could convince him to tattoo “Drive North” on his face.

That would be SICK.

He’s already got one face tattoo, may as well go big or go home.

We’ll start a hashtag on Twitter, a petition, and a GoFundMe. 2016: this is the future. Actually, speaking of the future – wow, that was an incredible segue – what is your biggest goal that you have for 2016 or the future? Do you have a certain venue you want to headline or a festival you want to play or a band you want to tour with?

Yeah, I want to sell out St. Louis because last time we played there, there were 10 people and half of them were racist as fuck.

Yeah, but since they were the only people that paid, we couldn’t be like “hey, you’re racist, get out” because they were paying for our gas.

So that’s a good goal then! And hopefully a lower percentage of the crowd is racist.

Yeah exactly, I just want to have the ability to tell the racist people to leave.

That’s a good goal. Hopefully you don’t have that problem in Canada. I know you guys are playing a couple of shows here this spring including a Toronto show in May for Canadian Music Week. Do you guys have specific things you’re excited to see in Canada?

Tim Horton’s. And poutine, and like also I want to see Drake’s house. And maybe go to Degrassi.

Those are very attainable goals, to be honest. Those are pretty close to the venue.

You could totally do it if you had a couple hours, you just drive east…it would be within about a half hour from you.

I think you guys should do it. There’s definitely…I think Toronto’s one of the cities in Canada where it’s more like the US but we do have these things like Drake and everything related to him that are ours.

Yeah, you have Drake, you have Alvvays, you have Mac DeMarco. You’ve even got Drake’s woes. Running through the 6 with his woes.

Oh yes, SO many woes. I have a fan question as well.

Carley was wondering if “Drive North” is going to be pressed on vinyl?

Yeah, it is, it’s just really backed up trying to get vinyl as an independent band because all the big labels with big money can get priority in all the plants that are left, but it will be on vinyl by summer.

Fantastic! Yeah, I know it’s rough trying to get through that process. I think that about rounds it out for my questions. Did you have anything specific that you wanted people to know?

That’s awesome, you guys are going to fit in so nicely in Canada.

It is! I believe the term they coined is “cultural mosaic”. It’s like the pieces fit together but don’t try to overlap or take over from each other; they just work side by side. Be careful when you get to Quebec though, learn a couple French phrases before you go.

Oh! I can speak French! I’m actually fluent in French.

Oh my god, I took French classes for 16 years and I have no idea what I’m saying. You’re doing better than 95% of Canadians.

Make sure you catch these guys at Adelaide Hall on May 6th. I made sure I already bought my ticket so you jackals couldn’t beat me to it.