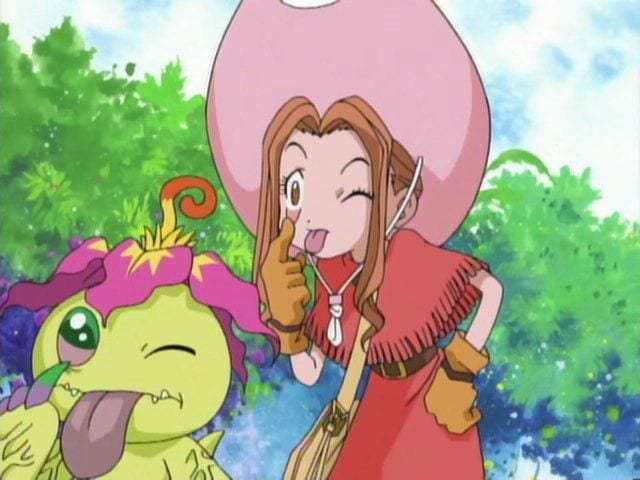 I’ll be the first person to tell you that the title of this sounds like clickbait. But come onnnnn, how can you say no to good 90s television? And by that I mean 10 cartoons, 1 game show, and 1 show that holds power over all the rest. Let’s count backwards, shall we?

First of all, watch the intro to Stickin’ Around and tell me the Eleventh Doctor didn’t get himself written into the show. Right in the title sequence. NICE.

I don’t even have to use Google to know that this cartoon was Canadian. Something about this show (and runner-up to the list, Angela Anaconda) just screams…”THIS WAS MADE IN CANADA, IT IS VERY POLITELY AGGRESSIVE”. There’s a girl who literally drags around a dead dog named Pepperoni. What the heck, Canada? Real mature. 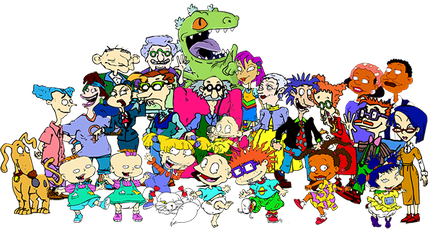 If you didn’t learn to play the Rugrats theme on the piano at some point, did you grow up in the 90s? Maybe, but probably not. I’ve probably seen every episode of this show a dozen times (such is the life of repeats on YTV), but I will burn every copy of The Rugrats Movie given the opportunity. Small Paige was so let down by how boring it was. At this point, I couldn’t even tell you what happened…but I assume it had to do with babies and hi-jinks. After growing up, I was a lot more concerned about things like the fact that these children should have never been left alone with Tommy’s grandpa unless the whole home was kid-proofed…but I digress.

Looking at all these cartoons is making me feel young again. How nice. Helga always seemed crazy to me, but now I understand how she feels because I watched Harry Styles audition for the X Factor in 2010. However, I don’t have a shrine in my closet (yet) and I’ve never hit someone standing behind me in the face with a closed fist (yet). Goals.

I still want to know why Gerald’s head is the shape that it is (there is definitely a part of his head that launches upward into that hair…is it all head?? Is it all hair??). 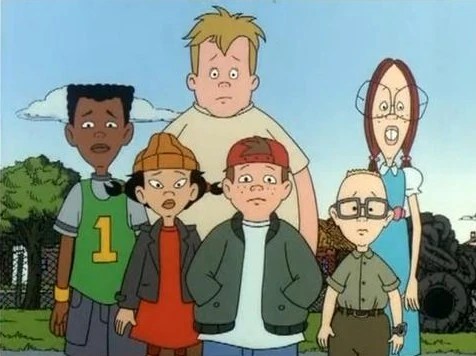 I have spent my whole life with multiple Ashleys in my classes but I don’t think any of them had a cool underground clubhouse. I always chose the name Ashley in recess make-believe games just in case someone decided to give me the password. I still want to be as cool as Spinelli. Take a look at this pic and take a look at the Hey Arnold! pic above and tell me how many similarities you spot between characters.

When I was a kid, the Magic School Bus would visit our school and you could visit the Bus with your parents to check out new MSB games and books. It was WILD. I played every game a million times, but you could never save your progress (terrible tech in the 90s or was I just dumb? Who is to say?) so I never collected all of the rocks and minerals in “Inside The Earth”. And to be honest, I think about that a lot. I really want to collect all those rocks and minerals. The show was just perfect, but I’ll admit I still get mad thinking about Arnold taking his goddamn helmet off on PLUTO. OF ALL PLACES. PLUTO. IT HAS ONLY COMPLETED ORBIT AROUND THE SUN 4 TIMES. IT’S COLD AS HELL, ARNOLD. PULL YOURSELF TOGETHER. More Canadian TV!! And they say it’s coming back!! I need more of Phong’s wisdom.

Essentially these people all lived in the Mainframe and purple game cubes (hello Nintendo I see u) would drop out of the sky. If you were inside of this space at the time, you would have you compete in the game. If the user won, anyone included in the game would be turned into a “null” and “nullified” and the whole sector of the Mainframe would be destroyed. Dot looks like Kris Jenner (that’s all I’ve got to say there) and Megabyte was mostly scary because of his skinny little robot legs. Hexadecimal was the true frightening baddie here. It’s taken me years to get over the nightmares. **following image NSFL** This was a CANADIAN GAME SHOW THAT MY COUSIN WAS ON. He got slimed. I had nightmares about getting slimed. I had a lot of fears as a kid, I’m now noticing. I always wanted to be on this show, but I have so many food allergies…I would die like 10 minutes into the game. You have to eat things blindfolded. What if they were like “surprise, bitch! bet you thought you’d seen the last of peanuts and bread!!”??

But in any case, I liked watching other people get slimed/win cool prizes.

I’m a big fan of Wobuffett, and my favourite episode is the one in the volcano where Charizard is having NONE OF ASH’S SHIT and goes to sleep on a ledge. I was mostly into the Nintendo games, but I will watch any episode with the Squirtle Squad. That’s my squad. I grew up to be one part Brock (desperately trying to collect email addresses from boys??) and one part Nurse Joy (pink hair). Oh, and one part missingno.

I think I learned English from this show. One time my dad heard me say “Jumping Jupiter!” after I nearly fell down the stairs…which I believe was said by Sailor Mercury…he laughed and I was mortified. He should be glad I didn’t learn English from him and launch off a series of expletives. I still dress up as the Sailor Scouts for Halloween whenever I have enough time to make my own costume. Finding out Sugar from The Zone did the English voice for Chibiusa was too much for my little brain. I still love this show, and I love when shows can entertain you at any age. So glad that the ultimate girl squad never let me down!!

I was a rare type, from what I hear. I liked Digimon waaaay more than Pokemon. I think my reasoning is pretty sound, though.

– The Digimon were never sent to fight other Digimon until they “fainted”. They would fight if their friends were in danger, and were only really seeking to get the black gears out of the enemy Digimon so they would be okay again.

– It dealt with real adult issues (like Matt and TK’s parents divorcing and them not seeing each other a lot, or Joe’s anxiety issues) in a way that kids could understand and relate to.

– The Digimon had terrible puns and I loved it. Especially Agumon.

I had a Digivice where you had to….shake it endlessly for hours to simulate “walking” and then your Digimon would evolve. It was a lot more strenuous than having a Tamagotchi. It also made me neglect my Tamagotchi. I wonder how they’re doing now…

I spent a lifetime making this face: WHOA just realized I grew up to be Teen Mimi?? 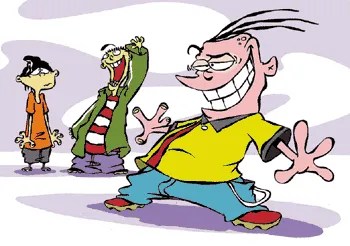 My favourite show ever. As a child, I was weirdly entertained by Ed’s lunatic behaviour (phrases like “buttered toast, Eddy!” and “gravy” will follow me to my grave). As an adult, I am weirdly entertained by Ed’s lunatic behaviour but now I identify a little more than I’d like to with Edd. I’m so glad I’ve never related to Eddy. If Charlie Kelly’s taught me anything about The Dirtgrub, Eddy is the Dirtgrub. One time I saw a cartoon of grownup Ed Edd n Eddy and it changed my life. Ed looked like Charlie Kelly, Eddy looked like Fred Durst, and Edd…

Please, universe, let this actual god among men live an eternal healthy, happy life for being the only reason I care so much about space and science in general. Let him teach all generations about why science rules, and let him make terrible science puns that you still laugh at because he’s BILL NYE. He was the reason why this is so important to us:

I’m going to buy a thousand stars in the sky and I’m going to name every last one Bill Nye.

Did I miss any 90s shows? Did you ever even see these weird Canadian cartoons, or did they never leave the Great White North?